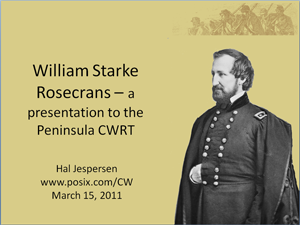 Hal Jespersen presented the life of one of his favorite Civil War generals, William S. Rosecrans, and asked the question: “How did a man of so many accomplishments fall from the heights of strategic success into relative obscurity?” Hal’s answer: an acerbic tongue that made enemies of at least two powerful men—Ulysses S. Grant and Edwin M. Stanton—and one poorly worded order at the battle of Chickamauga. Hal covered Old Rosy’s entire life, but concentrated on his Civil War campaigns, including Iuka/Corinth, Stones River, Tullahoma, and Chickamauga.

Hal’s slides are available for downloading at his website.

Charlie Sweeny provided the following notes about the presentation:

Rosecrans, a convert to Roman Catholicism, converted his brother; the latter became the Bishop of the Columbus (OH) Diocese. The general, a man of humble Ohio origins, got into West Point where he graduated in 1842 as 5th in a class of 55. His quick mind helped him to move up in the Army but he had an acerbic tongue which he used freely, often to his superiors.

Rosecrans resigned from the Army in 1854 and went into business. When war began, he volunteered to serve under McClellan. He became the colonel of the 23rd Ohio, but almost simultaneously a brigade commander as a Brigadier General for service in West Virginia. When McClellan went to Washington, Rosecrans was elevated to command the troops. He operated in the area for some time with much success. He even defeated Robert E. Lee. He was moved to the west early in 1862 as a Major General of Volunteers. After action at Corinth, Rosecrans succeeded Pope as the latter was transferred to Virginia. He was now in command of The Army of the Mississippi with which he fought successful battles at Iuka and Corinth. He soon was the commander of the newly named Army of the Cumberland. From 12 December 1862 to 3 January 1863 he fought Braxton Bragg in a bloody but indecisive campaign at Murfreesboro (the Battle of Stones River). In June Rosecrans attacked skillfully, forcing Bragg into Chattanooga. Rosecrans was then defeated at Chickamauga and was soon besieged in Chattanooga. He was then relieved. He served well in Missouri becoming a Brevet Major General. He left the Army and had a mixed career of diplomatic appointments and several businesses in California (where he died in 1898). Rosecrans, a gifted and enthusiastic leader was undone by his hot tongue and a badly worded order at Chickamauga, a major defeat.