Don Hayden on “The Amazing MacArthurs” 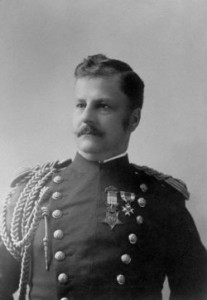 (Meeting description provided by Charlie Sweeny.) Few nations have had the likes of the brave père et fils MacArthur. Both were awarded the Medal of Honor for battlefield leadership and bravery.

The father, Lieutenant General Arthur MacArthur, was born in Massachusetts. He served throughout the Civil War in the 24th Wisconsin Volunteer Infantry. At age 20 he was made lieutenant colonel. He was wounded three times and was brevetted (meritorious promotion in rank) four times. He was Sheridan’s “Boy Colonel of the West.” He was cited for “Gallant and Meritorious Service” in battles at Perryville, Stones River, Missionary Ridge, Resaca, Dalton, Kennesaw Mountain, Atlanta, Jonesboro, and Franklin. He fought in the Indian Wars as a regular army officer (1866-1886). END_OF_DOCUMENT_TOKEN_TO_BE_REPLACED