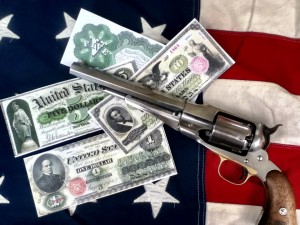 Arthur W. Henrick, a Civil War, Roman, and World War II reenactor, displayed and talked about Hard and Soft Money used in the American Civil War. He passed around coins and currency from the “Great Unpleasantness.”

He explained the economic situation and the coins issued in the 1850s as the US Economy exploded in rapid growth.

He explained how the Federal Government, after using every trick in the book to keep on a Gold Standard, had to resort to Fiat (faith) paper money in early 1862.

Since 1967 when the last Silver Certificates were no longer convertible to silver coin 1:1, the current currency we use today is exactly like Civil War “Greenbacks” and not payable in gold or silver.

Arthur Henrick of Sunnyvale works currently as an Quality Engineer at Cutera, a Medical Laser company.

Charlie Sweeny provided the following summary of the meeting: END_OF_DOCUMENT_TOKEN_TO_BE_REPLACED