The story begins with Robert E. Lee’s surrender of the Army of Northern Virginia at Appomattox Court House and moves to Lee’s time as President of Washington College in Lexington, Virginia. One of Lee’s first acts as President was to plan for and construct a chapel on the campus. The chapel would be used for both daily worship and school assemblies. The chapel was completed in 1868 – just two years before the death of Robert E. Lee. The name of the college was changed to Washington & Lee immediately upon Lee’s death. 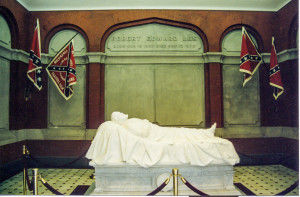 On January 24, 1912, Dr. Henry Louis Smith became the President of Washington & Lee. He soon began a campaign to raze Lee Chapel and replace it with a larger and more suitable structure. Initially he received support for this project from all quarters. But a small chapter of the United Daughters of the Confederacy in Lexington did not share Smith’s vision. In fact, the ladies would begin a letter writing campaign that would transform the issue into a nationwide debate. The story of their valiant efforts to save Lee Chapel is the topic for this presentation.

Jack’s presentation included such topics as Little Egypt dancing (for men only!); Germans made up to look Japanese, pulling rickshaws; ukulele concerts; and Sousa’s Marching Band.

Walter hosted a video presentation, Civil War Journal from the History Channel. This episode was titled “Sherman and the March to the Sea.” This video is part of an acclaimed series from The History Channel that chronicles the American Civil War. The series uses archival photographs, diaries, articles, re-enactments, and scholarly commentary to tell the story of the War Between the States. This episode chronicles General William Tecumseh Sherman’s march to the sea. Leaving Atlanta in flames and ashes, Sherman’s troops waged a scorched earth campaign from there to the coast, disheartening the Confederacy. Hosted by Danny Glover and produced by The History Channel.