Art presented the life of Mary Todd Lincoln, the first woman designated as the First Lady of the United States, and certainly the most controversial. Meeting description provided by Charlie Sweeny:

The story of the upper class lady married to an uncultured country man is worthy of Victorian fiction but it was the truth of our sixteenth chief magistrate’s emergence from the boondocks to the top circles in the land.

Mary was born to affluence, a child of a large socially prominent family in Kentucky. She was a high-spirited, well-educated and quick-witted lady of short height and plump cheeks. She moved in with her Springfield (IL) relatives where she met Mr. Lincoln. The Springfield kin, the area’s social leaders, did not approve of the bumpkin-lawyer as a suitor. However, by this time the unpolished Lincoln was a highly successful lawyer whose income matched that of the state governor. 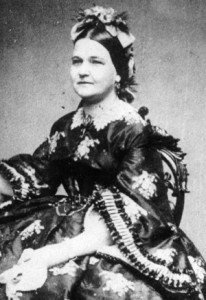 The on-again, off-again courtship finally was consummated on November 4, 1842. She was very successful in teaching her husband the many social graces that he so badly needed in his upward climb.

They shared a deep love. They had four children, all boys and only the oldest survived into adulthood.

Her husband’s absences (both as a lawyer and as president) were very difficult for Mary. The deaths of young children, first Eddie and then Willie, were unhinging. Her excesses included rash, large purchases of expensive clothing. The murder of her beloved right in front of her was a huge catastrophe from which she never recovered.

Her relationship with Robert, the oldest and surviving son, had never been close. Her irrational days in the 1870’s led to Robert having her committed to asylum care. After a few years, an activist female lawyer (among the first) had her freed. Mary lived out her lonely days in seclusion.