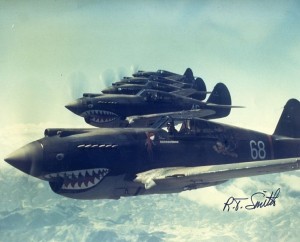 In the early days of what was to become WWII in the Pacific, a small group of Americans began training for what was going to become one of the most heroic efforts of the war. The Chinese had been invaded and needed an air force to protect their supply lines and allow them to survive the unceasing onslaught of the Empire of Japan. This presentation covered the formation of the American Volunteer Group, the perils of Flying the Hump, and the Doolittle Raid on Tokyo. This was the American Air War in China that lasted for the time it took to defeat the Japanese. The foundations of the Sino-Japanese War was presented along with the strategy that was put in place to allow the Chinese Nationalist Government to survive the war.

Ray has a Master of Arts degree in history from San Jose State University and he is the historian for the Saratoga Historical Foundation.

The following meeting summary is provided by Charlie Sweeny.

Much of the world’s attention during World War II was on the many campaigns in the Pacific theater and on the European-Middle Eastern theater. CBI, the China-Burma-India action, took a backseat most of the time. However, the American Volunteer Group captured early attention. The Chinese called all American personnel “Flying Tigers”, not just aviators.

Their fame arose from:

The AVG was a small, scraped together outfit living a meager existence, fighting in a primitive part of the world. They provided rare and valuable help to the Chinese as well as heartening the American homeland.