The annual West Coast conference will be held in Tulare, California, November 13–15, 2015. Information about the schedule and hotel, and a registration form, are available at sjvcwrt.com/conference.html

Chris Palmer on “Bleeding Kansas: A Brief look at the Struggle for Kansas Statehood and the First(?) Battles of the Civil War” 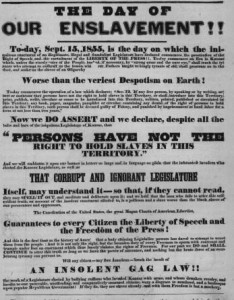 The Kansas–Nebraska Act was passed in 1854 and settlers started to move into the new territory. Neighboring Missouri was a slave state since 1820 and realized a “threat” to their possible slave expansion west. A part of the Kansas–Nebraska Act was popular sovereignty where residents could vote for or against slavery. Missouri did not want a neighboring free state and flooded Kansas to get political control of the territorial legislature. “North and South Rights” are debated for free men to vote their fate while property rights slave holders see their liberty intruded upon. If Kansas is admitted slave, slavery may expand throughout the US rendering the Missouri Compromise of 1820 moot. Things escalated as political forces built on Free-State and Border Ruffian sides with voting problems, intimidation, beatings, theft, and general mayhem. As a shooting conflict starts in 1856, will Kansas enter as a free or slave state?